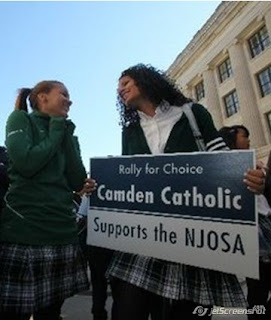 The inadvertent slip of honesty below, written about school vouchers in New Jersey, should tell us how flawed the voucher argument is.

NJ.COM: The bill to establish a school voucher program in New Jersey got off the ground yesterday with a unanimous vote in committee … Outside, children in Catholic school uniforms chanted in favor of the vouchers. Many of their sister schools have closed recently, and their own parents often strain to pay tuition. The voucher bill would address both problems.

And like most voucher programs pushed by the states, testing and accountability are rarely a consideration. Neither are studies that have given failing grades to religious vouchers schools. You'll be surprised (maybe not) at how bad the voucher bill is:

The bill has flaws that should be repaired. It drains too much state aid from public schools that lose students, and should instead follow the model of financing charter schools. It also lacks a mechanism to exclude private schools that are performing poorly.

Isn't it odd how proponents bash the public schools for holding on to "so many" bad union teachers that can't be fired, yet seem willing to allow poorly performing voucher schools to continue to rake in taxpayer money?

This is what the voucher argument has been about forever. And this tiny little story at nj.com is a reminder.
Posted by John Peterson, Democurmudgeon at 5/14/2010 09:33:00 AM