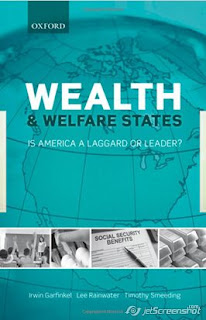 Poor Rep. Paul Ryan, his recent "welfare state" rap on Greece, the problems associated with it and the warning it could happen in the U.S., has now been proven to be a myth. Like his "Road Map" shift of wealth to the wealthy, the horrors of the welfare state actually strengthen capitalism. Doh!

A new book "Wealth and Welfare States: Is America a Laggard or a Leader?" explores the role of the welfare state in the overall wealth and well-being of nations and, in particular, looks at the American welfare state in comparison with other developed nations in Europe and elsewhere.

The authors argue that generous investments in education and other social welfare programs provided a foundation for America's economic growth," says Maria Cancian, professor of public affairs and social work. "The book not only turns
conventional wisdom about the minimalist American welfare state on its head, but also reframes the current debates about how to return the country to a period of broad-based prosperity."

Though few would argue that public education is not part of the welfare state, most previous cross-national analyses of welfare states have omitted education, the book shows. The authors argue that from 1968-2006, the United States swung right politically and lost its lead in education and opportunity, failed to adopt universal health insurance and experienced the most rapid explosion of health care costs and economic inequality in the rich world.

(America needs to) restore its historical lead in education, beginning with universal preschool. The American health insurance system is by far the most costly in the rich world, yet fails to insure one-sixth of its population; produces below average results; crowds out useful investments in children and is the least equitably financed. Only complete government financing is likely to restrain long-term costs, the authors say.