Dan Finnelly, a Republican nomination for Florida’s 8th district, is the subject of well deserved ridicule by Jon Stewart on a recent daily show: 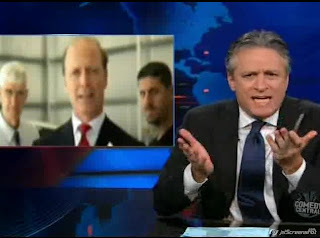 As blatantly racist as that was, many conservatives believe that because the ad was "funny," it was therefore NOT racist. That's why many Republicans find racist and white supremacist Rush Limbaugh a laugh riot.

Olbermann’s essential beef seems to be that Finnelly advocates some kind of rational screening policy at airports. This leads Olbermann to to apply both the “R” word and the “P” word, then respond to Finnely’s clearly self-effacing joke with a zinger of his own. So … clearly the less-than-ripped, balding Finnelly is poking a little fun at himself while making a larger point.

Crazy talk? Try this reader comment on for size:

Good analysis. Refreshingly well-written. Olbermann has no identity other than being fueled by what he hates.