Ezra Klein on the cost of Health Reform: "covering 34 million Americans is worth adding a percentage point..." 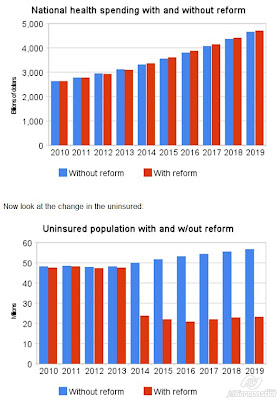 If you haven't noticed already, the Washington Post's Ezra Klein knows health reform, and this lates piece of information about the horrific rising cost to consumers in the next 9 years by Republicans is really... just bluster.

As Third Way says: "The actuary’s report shows that the nation will be getting a bigger bang for its health care buck. For a mere two-tenths of one percent more in health care spending, the new health care law will cover most of the uninsured and more Americans will be healthier and living longer because they will be getting treatments like cancer care and heart surgery that had previously been denied them."