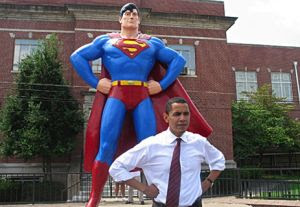 According to Karl Rove: "Yes, the Gulf Spill Is Obama's Katrina. Where was the White House plan, and why has it been so slow to make decisions?"

That was expected, but fear brought out the Republican in some of us:

UPI: James Carville criticized the president's "lackadaisical" response to the spill.
"It just looks like he's not involved in this," Carville said.

Warning, warning Will Robinson, self loathing Democrats self destructing.

Super Obama should just fly down to the bottom of the Gulf and crimp the pipes closed. Why hasn't he acted?
Posted by John Peterson, Democurmudgeon at 5/26/2010 07:09:00 PM