Justice Thomas: Off with their heads!!! Capital Punishment for 7 Year Olds NOT a Bad Thing. 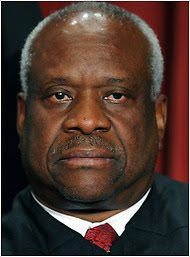 The conservative activist supreme court justices are at it again. To them, a life sentence for breaking ones parole, is not a violation of your 8th amendment rights. Hell, in the 18th century that happened all the time. Thomas, the freeloading justice, found the details to troublesome to deal with and would only cloud the issue up with empathy.

NY Times: The Supreme Court ruled that juveniles who commit crimes in which no one is killed may not be sentenced to life in prison without the possibility of parole … the Eighth Amendment’s ban on cruel and unusual punishment forbids such sentences as a categorical matter.

How would a strict constitutional constructionist react?

Justice Thomas predicted that Monday’s ruling would give rise to years of litigation about just what sort of parole or other processes states must provide to provide the required “meaningful opportunity to obtain release.”

That’s…outrageous? For constructionists like Thomas, the constitution does not evolve or broaden over the advancement of civilization. For example:

As usual in cases involving the Eighth Amendment, the justices debated whether the Constitution should consider, in a one common formulation, “the evolving standards of decency that mark the progress of a maturing society.”

Only the atrophied mind of Thomas, along with all ideological constructionist theorists, would take the following approach:

Justice Thomas said the court should look to the practices at the time the Bill of Rights was adopted. Given that capital punishment could be imposed on people as young as 7 in the 18th century, he said, Mr. Graham’s punishment would almost certainly have been deemed acceptable back then.

Justice John Paul Stevens, in a concurrence joined by Justices Ginsburg and Sotomayor, said Justice Thomas’s “static approach to the law” did not allow for societal progress and would entail unacceptable human consequences.

“Justice Thomas would apparently not rule out a death sentence for a $50 theft by a 7-year-old,” Justice Stevens wrote. “Knowledge accumulates,” he wrote. “We learn, sometimes, from our mistakes.”

Thomas was joined by Scalia, Alito and Roberts, the predictable coalition of conservative activists.
Posted by John Peterson, Democurmudgeon at 5/18/2010 01:26:00 PM