It's Back, the Texas School Boards Rewrite of History. Will there be a National Call to Bar it's Use? 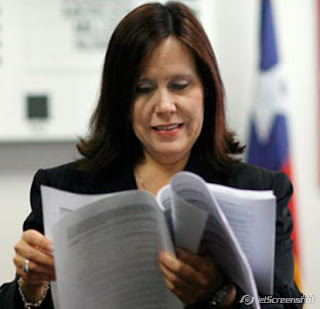 Why isn't every state in the country proposing a ban on the Texas rewrite of history? Here's a Guardian UK story that you have to keep telling yourself, "it's not fiction," this is really happening.
Cynthia Dunbar does not have a high regard for her local schools … called them unconstitutional, tyrannical and tools of perversion. The conservative Texas lawyer has even likened sending children to her state's schools to "throwing them in to the enemy's flames".

Dunbar was elected to the state education board on the back of a campaign in which she argued for the teaching of creationism – euphemistically known as intelligent design – in science classes. Two years ago, she published a book, One Nation Under God, in which she argued that the United States was ultimately governed by the scriptures.

She is one of a clutch of Christian evangelists and social conservatives who have grasped control of the (Texas) state's education board … a sweeping purge of alleged liberal bias in Texas school textbooks in favor of what Dunbar says really matters: a belief in America as a nation chosen by God as a beacon to the world, and free enterprise as the cornerstone of liberty and democracy. "In Texas we have certain statutory obligations to promote patriotism and to promote the free enterprise system. There seems to have been a move away from a patriotic ideology. There seems to be a denial that this was a nation founded under God. We had to go back and make some corrections."

1. Sidelining Thomas Jefferson, who favored separation of church and state, while introducing a new focus on the "significant contributions" of pro-slavery Confederate leaders during the civil war.

2. Study of Sir Isaac Newton is dropped in favor of examining scientific advances through military technology.

3. There is also a suggestion that the anti-communist witch-hunt by Senator Joseph McCarthy in the 1950s may have been justified.

4. The education board has dropped references to the slave trade in favor of calling it the more innocuous "Atlantic triangular trade."

5. One amendment requires that students be taught that economic prosperity requires "minimal government intrusion and taxation".

7. Some figures have been sidelined because they are deemed to be socialist or un-American. One of them is a children's author, Bill Martin, who wrote a popular tale, Brown Bear, Brown Bear, What Do You See? Martin was purged from the curriculum when he was confused with an author with a similar name but a different book, Ethical Marxism.

The California legislature is considering a bill that would bar them from being used in the state's schools.