We can save Social Security without Privatizing it. 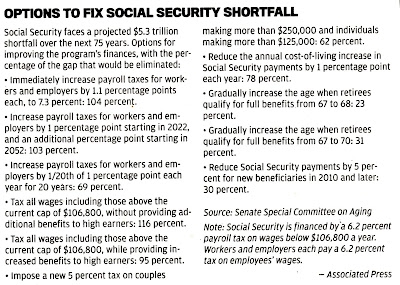 I found the above chart of options for reforming Social Security interesting enough to question the Republican Parties "sky is falling" rhetoric about taking dramatic action on something that's not going to be there for our kids. Below is a press release from Sen. Herb Kohl that pretty much "took the words right out of my mouth."

“This report shows that, contrary to popular belief, the sky is absolutely not falling for Social Security," said Kohl. "By implementing one or more of these modest changes, we can ensure solvency and even strengthen benefits for those who count on their monthly check the most."

Kohl said he hopes the report, delivered to members of the president's National Commission on Fiscal Responsibility and Reform, helps inform the debate about the solvency of Social Security. He reitierated that, "Social Security has never been
responsible for one penny of the federal deficit, and by law is barred from doing so."