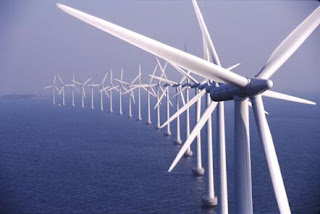 Jobs, jobs, jobs. That's what the upcoming election is all about. Republican campaigns are gearing up to bash Democrats for not doing enough to replace the jobs lost by Republicans over the last 8 years. Good news though, jobs are on the way:

jsonline: Plans to build a sprawling factory that would make giant wind-turbine blades and create 600 jobs in north-central Wisconsin - the heart of the state's struggling paper industry - got a boost Tuesday when the state approved $45 million in bonding authority (part of the stimulus) for the project.

Energy Composites Inc. also announced that it has purchased two pieces of land in Wisconsin Rapids to build the factory, which would make turbine blades for use in land and offshore wind farms.

This is great news for Wisconsin, and great news for those looking for work. That's 600 new jobs and a foot in the door as we usher in the new green economy. Jobs are jobs, 600 of them.

But Republican ideologues registered their outrage in the comments section following the story. These aren't the kind of jobs they had in mind:

rmwfranklin: Wind power is NOT a good investment for the little power we get from these hulking eyesores! Pretty soon we won't be able to go anywhere in this state without encountering these blights-on-the-landscape. Clean energy...yeah, right … I see the Doyle Administration was hard at work letting 115 jobs walk out of the state to Mississippi!! Fiskars is moving ... Way to go Jimbo!

sneagles: Put this in the category of "Feel Good" stuff.. Unless this firm diversifies into other product lines, the whole "Wind Mill Thing" will fade as fast as bellbottoms during the "Carter Years". Wind mills are fashionable at the moment as "Greenies" love the tree hugger energy approach, but will never cut it as a major source of power … As to mountain top mining, who cares?? They are required to restore lands to acceptable standards after they are done mining, unless its the Obama Administration who is monitoring at which point something will get screwed up.

But there was one voice of sanity over the addition of 600 news jobs for Wisconsinites:

3rdwardmark: Are you kidding me? every country around the world is investing
heavily in wind energy, but all of a sudden we're just going to throw it all
away? and do what? just keep mountaintop mining for coal? now talk about an
eyesore...have any of you ever seen what mountaintop mining does to the
landscape? its people like you conservatives that will be the downfall of this
country.