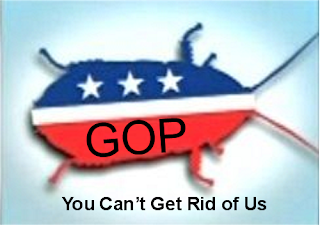 I recently commented on a conservative talk show host's Facebook page, and received this wonderful and insightful reaction. What makes this so great is that it is so typical.
The only thing missing was the time worn "you never offer anything of substance," or "besides insults, you never offered any details." It's never an accurate comeback, but to conservatives, facts have never offered any substance or detail. Facts are just the same old liberal talking points. Enjoy:

Agalah Kasdah commented- "Your charges about Republicans in this are ridiculous. Both parties are equally guilty ... That being said...number one, the Foundation of this economic disaster was Fannie Mae and Freddie Mac. Certain Republicans (including Bush) tried to stop what was going on and were rebuffed in a cascade of racism charges. Yes, the other dirt bag banks ran with their own corruption but this all started with Dhimmi-c-rat redistribution programs.

That's just wrong. Republicans for years have been trying to take out Fannie and Freddie, so this was a convienent way to reinvent this utlimate villian. It was part of the demise, but was not the cause.

Number two, OUR ECONOMIC DISASTER DIDN'T REALLY START UNTIL AFTER PELOSI TOOK OVER CONGRESS IN 2006 AND STARTED THE SOCIAL JUSTICE FREIGHT TRAIN. Things rapidly went from more or less stable to catastrophe from 2006 on out.

Republicans can't get enough of dropping "Pelosi's" name into every conversation. To them, it has the ring of evil, not to mention another convienent shot at a powerful WOMAN who should be in the kitchen barefoot and pregnant.

It has been Congress' Biblical and treasonous stupidity for MANY decades that created this mess. Presidents come and go, but, sewer rats like Teddy Kennedy, John McCain, Chris Dodd, Lindsey Graham, Barney Franks, go on causing devastation forever like untreated Syphilis.

As you can see here, conservatives never call people names, and are always providing facts and substance.

You speak on Conservative efforts to get balance (budgets) with activist judges but the utter rewriting of the meaning of the Founders principles by Hypocritical Liberal Lawyers and judges in the effort to remove religion from our society as a moderating influence on behavior and the promotion of hedonism and self-centered attitudes into the children have doomed their futures.

Remember when Republicans said liberals hated our country, because they're always complaining about something? And Democrats were always trying to scare people so they could push their socialist agenda? Was the preceeding statement happy and constructive, or paranoid and complete BS? And finally, this uplifting thought:

Couple that with the focus on creating hatred of country and harping the evils of the majority culture into these children (without ANY honest comparison to the evils inherent in the rest of the world) has brought us thus."

Republicans, conservatives, libertarians and tea party protesters sure have an inflated impression of themselves and their failed economic policies.
Posted by John Peterson, Democurmudgeon at 5/29/2010 12:11:00 AM