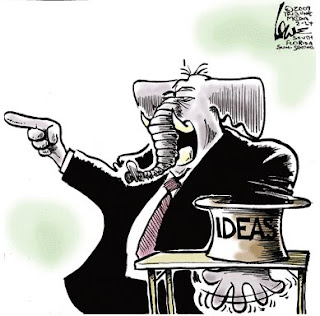 So you want the Republicans back in power because…of the transparent tricks they're pulling on Democratic bills in congress? Good God are you crazy.

AP: Democrats had to pull the bill after half their members voted for the GOP measure that, in addition to severely shrinking the technology bill, put them on record as supporting the firing of government workers who view or download pornography on the job.

It was the second time in a week that Republicans used such a tactic to their advantage. Last week they brought about major changes to the Cash for Caulkers bill to subsidize people who buy energy-efficient products for their homes by attaching a provision barring building contractors from hiring child molesters.

The original bill would have approved some $85 billion over five years to double funding for basic research at the National Science Foundation and the Department of Energy's Office of Science, extend grants and loan guarantees to small businesses working with emerging technologies, and promote science and math education in schools.

Besides the pornography provision, their motion shrunk the bill from five years to three, eliminated all new programs in the bill and froze spending for existing programs.

Independent and swing voters are favoring the Republicans in the upcoming midterms because…what the hell are they thinking?

This is exactly what Republicans did in Arizona when they banned ethnic Chicano/Mexican studies. Notice how they loaded the issue with the first two outrageous points of the ban. Schools cannot...

1. Promote the overthrow of the United States government.
2. Promote resentment toward a race or class of people.
3. Are designed primarily for pupils of a particular ethnic group.
4. Advocate ethnic solidarity instead of the treatment of pupils as individuals.

How could you not vote against the first two and last item? Taken alone, item 3 would never honestly be banned from schools. Arizonians are fools to be taken in by this GOP tactic.
Posted by John Peterson, Democurmudgeon at 5/13/2010 04:34:00 PM