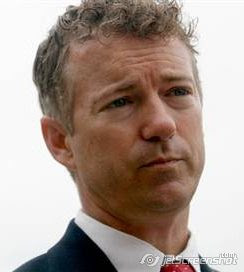 In the libertarian world of little regulation and flourishing businesses, when people get hurt or killed by products or workplace environments, stuff happens. Stop passing blame, it's so un-American.
In one of the most revealing if not appalling statements from any conservative/ libertarian snake we've heard from so far, Paul's ideological view point is strikingly irresponsible. Take the killer BP oil spill:

In Rand’s world view, you go to work and take your chances. So what if 11 workers were killed and the Gulf coasts ecosystem is heavily damaged by millions of gallons of oil, holding BP accountable is un-American and obviously just an accident.

"And I think it's part of this sort of blame-game society in the sense that it's always got to be somebody's fault instead of the fact that maybe sometimes accidents happen," Paul said.

The Senate candidate also referred to a Kentucky coal mine accident that killed two men, saying "We had a mining accident that was very tragic. ... Then we come in and it's always someone's fault. Maybe sometimes accidents happen," he said.

Maybe Rand Paul's got a point. So what if there’s lead in your food and children’s toys, mercury laced fish and cancer causing pollutants in the air…it happens. Stop being so anti-American.
Paul is giving every tea party protester and conservative nut job the language to use to justify their vision of a loner society where you get what you deserve. You bought the defective car, get over it. Your child choked on a toy, accidents happen.
Like the founding fathers wrote into the constitution, “quite your complaining,” or something like that.. right?
Posted by John Peterson, Democurmudgeon at 5/21/2010 03:12:00 PM

Labels: Libertarian
Email ThisBlogThis!Share to TwitterShare to FacebookShare to Pinterest