Here's the Rachel Maddow/Rand Paul interview that has ignited every Republican/conservative voter in America. From what I've noticed listening to conservative and liberal radio shows, Republicans callers appear to have had an Epiphany. It's okay for private businesses to shut their doors to anyone, including... minorities. They love it.


Every one of them agreed with Rand Paul, that any private entity can discriminate, as long as they don't take government money.


It would also appear that this one caveat mentioned by Paul would completely obliterate civil rights laws, freedoms, liberty and encourage a divided segregated America, as meant by the constitution. 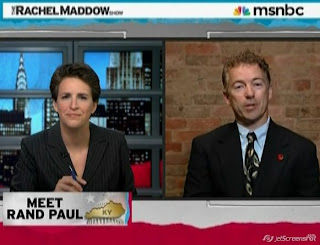