Dumbed-down Lawmakers Dumb-down Schools. Is That the kind of Future we want to Hand down to Our Childrens Children? 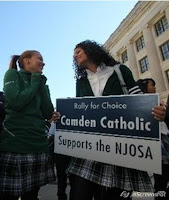 Republicans have never met a problem they couldn't kick down the road. Under the false truism and myth that "parents know better when it come to education," Republicans are not only dramatically cutting school funding in the name of "balancing their budgets," but they're running from the problem by giving taxpayer money away to any private school that will take it with no strings attached.

(New Jersey) School officials in Verona and Cedar Grove say a new bill passed by the state Senate last week could make public education funds more difficult to obtain. The bill results in a loss of $360 million to public education, and instead diverts it to private and religious schools, with no requirement that these schools meet state education quality and performance standards, said Gene Polles, superintendent of Cedar Grove schools.

"The absence of any educational accountability for the private and religious schools receiving public education dollars through vouchers is remarkable, given the intense levels of scrutiny the state now places on public schools, especially those with high student need," added Polles. "The program would divert $360 million in tax dollars to private schools, at a time when New Jersey's public schools are absorbing a $1 billion cut in aid as proposed by Gov. Christopher Christie," the NJPSA said in its Web site.

Let's not pretend. Republicans are using kids and their parents to vilify and destroy the unions representing teachers. They are intentionally reducing state budget coffers with corporate give-a-ways to speed the process along.

Funding would come from donations by corporations who would receive tax credits equal to their contributions.

The double whammy. I hope that these privatization moves put these states at an educational disadvantage in the future when it comes to business relocation.
Posted by John Peterson, Democurmudgeon at 5/20/2010 09:41:00 AM