Republicans are determined to win one for the Mitt.

Republicans thugs are revoking the free speech rights of Democratic voters who want to express their support for their candidates. Billionaires can run untouchable radio and TV ads, citizens have to replace trashed or stolen yard signs.

I was fascinated by the way this article started off: 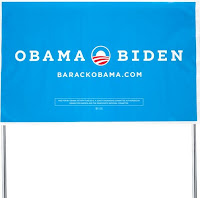 Stevens Point Journal: Police are investigating a unusually high number of incidents of vandalism to political signs in the Stevens Point area … signs being damaged is costing political organizations more time, effort and money, party officials say. Signs for Democratic Party candidates have been damaged more than those for Republican candidates, but both sides say they are sick of the problem.

Both sides? Really? No…that’s not true, because late in the story….

As of Tuesday, the Democratic Party of Portage County has repaired or replaced 63 signs at some 40 sites, said party member Kent Hall. Hall said, “Whoever is doing this obviously has no concept of freedom of speech.”

But this is where we finally find out who was really losing their rights, in the most casual way:

Olszewski said the Republican Party hasn’t kept track of how many their signs were damaged, and said party members don’t always report when they get replacement signs. She agreed that most of the damage this election cycle has been to Democratic Party signs.

Whew, that was difficult.