Exploitation of a tragedy. The Benghazi attack was the opportunity of a lifetime for Republicans, who were desperately losing the national security credentials. Of course they lost that when Bin Laden attacked on 9/11, and when they gave up the search for the terrorist leader. But the myth lived on within the lazy media. The Romney campaign needed to trump up something quick.

With the help of the lazy media, who will always appear balanced regardless of the facts, Republicans are again winning the hearts and minds of the low information independents. Paul Ryan, with his cartoonishly forced puppy dog eyes, took a shot at the embassy tragedy during the debate. Here are the budget cuts and comment from Hilary Clinton on those cuts:

The public might just be voting in what is largely a fake, unqualified candidate and VP for the ultimate goal of one party rule. A win is a win. The details back up Joe Biden's comments during the debate: 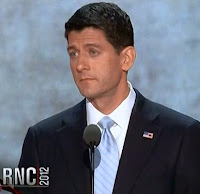 -Diplomats on the ground sounded increasingly urgent alarms … embassy security officers warned their superiors at the State Department of a worsening threat from Islamic extremists, and requested that the teams of military personnel and State Department security guards who were already on duty be kept in service. The requests were denied, but they were largely focused on extending the tours of security guards at the American Embassy in Tripoli — not at the diplomatic compound in Benghazi, 400 miles away.

-Based on Congressional testimony, those security decisions appear to have been made largely by midlevel State Department security officials, and did not involve Secretary of State Hillary Rodham Clinton or her top aides. Patrick F. Kennedy, under secretary of state for management, said at Wednesday’s hearing. “We are not an armed camp ready to fight it out.” “Our people can’t live in bunkers and do their jobs,” Mrs. Clinton said Friday.

-At American diplomatic facilities overseas, the host nation is primarily responsible for providing security outside the compound’s walls. Inside the compound, the State Department is in charge, relying on a mix of diplomatic security officers, local contract guards and Marines. The Marines are responsible for guarding classified documents, which they are instructed to destroy if there is a breach of the compound. Senior diplomats are protected by diplomatic security officers, not a detachment of Marines, as Mr. Ryan asserted in Thursday night’s debate.

-Senior administration officials said Mr. Biden’s answer was accurate because while the embassy in Tripoli requested an extension of duty for 13 military or diplomatic security officers — which the State Department denied — it did not request additional guards for the mission in Benghazi. Moreover, they said, the request did not reach the White House.

Playing the Victim Card (just for good measure): The Romney/Ryan campaign will do anything to “win.”  Playing on the popular conservative notion that they’re being “victimized” again by the mean old liberals, Ryan successfully manipulated voter support for their bold faced lie and conspiracy theory. Ryan even admits responsibility for revving up the anger:

“First they blame a YouTube video and a nonexistent riot,” Mr. Ryan told supporters in Lancaster, Ohio. “Then when the country’s getting upset about it, they blame Romney and Ryan for getting people upset about it.”