While the courts strike down voter suppression laws that deal the mythical idea of "voter fraud," right wing radio talk hosts are of course, doubling down. They are the designated voices in the Republican echo chamber, willingly broadcasting to an exclusive audience of pliable paranoid minds.

Devoid of idea's and policies that appeal to a majority of voters, suppression is the easiest of scams. Listen to the following audio message from WIBA's Vicki McKenna, who breathlessly splatters a endless stream of disconnected words and idea's together, that to a conservative listener, makes perfect sense:

And to think I had I sat across from her for an entire year...

Next door in Minnesota, elected officials have seen their share of voter suppression billboards: 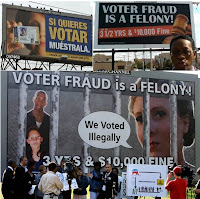 “The proposition that Minnesota leads the nation in voter fraud is laughable. If anything, we lead the country in successful prosecutions,” said Ramsey County Elections Manager Joe Mansky. “This (Voter Photo ID) proposal that will go on the ballot deterred none of the cases that we prosecuted.”

Mansky was responding to a question by WCCO-TV’s Pat Kessler about a freeway billboard outside of the Twin Cities which erroneously alleges that Minnesota leads the nation in voter fraud.

If the picture to the right doesn't tell the whole story, check out this video coverage from WCCO-TV, who is at least attempting to get the word out about the right wings voter suppression tricks.Remember that despite the fact that voting is a constitutional right, supposed "constitutional conservatives" want to take that right away. Go figure: