Here's another addition to my long list of illegal actions by Republicans to commit voter and election fraud.

This amazing story should dispel any notion the GOP fear and suspicion of voter fraud had more to do with their own wishful thinking. And get a load of the skinhe...I mean, suspect: 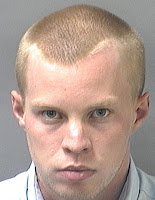 TPM: A Pennsylvania man employed by a company working for the Republican Party of Virginia was arrested by investigators from the Rockingham County Sheriff’s office on Thursday and charged with destroying voter registration forms.

Colin Small, a 31-year-old resident of Phoenixville, Pa., worked for Pinpoint, a company hired to register voters on behalf of the Republican Party of Virginia. Prosecutors charged him with four counts of destruction of voter registration applications, eight counts of failing to disclose voter registration applications and one count of obstruction of justice.

Rockingham County Sheriff Bryan Hutcheson’s office said there was no indication that the activity was widespread in their jurisdiction and said the conduct “appears to be limited in nature.” His office said there is a possibility that additional charges may be filed.

Hutcheson’s office began investigating after the manager at a Tuesday Morning store in Harrisonburg, Va., allegedly spotted a man on Monday afternoon throwing eight voter registration forms into a dumpster behind the shopping center where he works.