Republicans are horrible at managing taxpayer money, that’s why they want to downsize government; less work and great benefits. That's also why they caused the Great Recession. You can’t set up a budgetary system based on ideological theory. Accountants will always insist on numbers.

Remember when Scott Walker said he simply came into office like a small business man and did what had to be done? How’s Walker looking as a business man now, playing the top guy of the Wisconsin Economic Development Corporation? Of course conservative talk radio will somehow miss this story and allow their "leaders" to get away with another dramatic failure. 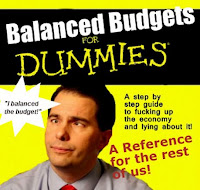 jsonline-Jason Stein: For more than a year, the state's flagship jobs agency failed to track whether businesses are repaying loans from state taxpayers - leaving the public in the dark about how much they are owed on a total of $8 million in past-due loans to 99 businesses.

The blunder - only the latest in a whole series of problems at the Wisconsin Economic Development Corp. - began at nearly the same time as the quasi-public authority championed by Gov. Scott Walker took over for the state's previous jobs agency.

Ryan Murray, the WEDC's chief operating officer … said he learned … the agency had stopped systematically tracking its loan collection efforts and has no records on those efforts since June 2011, the month before the WEDC started. "Clearly, a ball was dropped here a year ago but the system worked in uncovering it," said Murray.

Yes, it sounds like the system is really working well. These freeloading politicians who can’t make a go of it in the private sector don’t have a clue about what it takes to manage a business. And now we've got another example.

Democrats were incredulous at the failure at the WEDC, which has been repeatedly touted by Walker as an agency that would be run like a business.

But that's not all, outgoing Paul Jadin knew the shit was about to hit the fan, but didn't bring up the above mentioned story. Incredible:


WKOW-Greg Neumann: Before stepping down as the Secretary and CEO of the Wisconsin Economic Development Corporation at the end of this week, Paul Jadin told a legislative committee Wednesday morning that the agency should have more thorough reporting requirements. "I would suggest that the more clear and concise direction you can give to any economic development agencies the better."

But the WEDC is not required to report certain specifics to the legislature, including the number of jobs it creates or where those jobs are located. It also doesn't have to show lawmakers which companies are receiving tax benefits and how much those benefits are worth.

Guess who tried to prevent all this from happening...Democrats


Republicans blocked efforts by Democrats to require that disclosure at the time the agency was created.