Forget the senate race for a moment. I want to highlight two facts revealed in a recent article about that race pitting Rep. Tammy Baldwin against former Gov. Tommy Thompson.

Thompson just released his irresponsible plan to remake Medicare into something similar to the federal employee plan. Not a good idea! According to the article, he didn't know whether his latest plan will save recipients or the federal government money. Is he senile?

Right off the bat Tommy crushes seniors with higher costs. Brilliant. Here's what would happen: 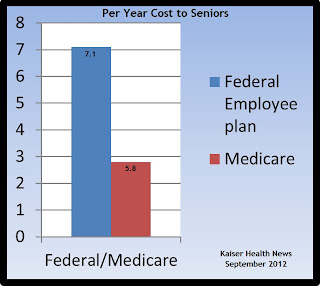 WSJ: The organization reported that the data analysis and interviews with experts showed the federal employee plan "had not held down costs per enrollee as efficiently as Medicare during the past decade."

A side-by-side evaluation of Medicare and the federal employee health insurance program done in September found the federal plan grew by an average of 7.1 percent per enrollee per year compared to a 5.8 percent average growth rate for traditional Medicare.

According to Thompson: "This is a plan by Paul Ryan, I've modified it. I think my plan is better." Great plan Tommy.

The graphs and additional costs discussed below are all based on Ryan's premium support model, and NOT the current system. Private bidding will affect both traditional and private plans.

Paul Ryan's plan crushes seniors too: Ryan's plan includes the option to stay in the traditional plan, or take premium support. He's used that change to confuse and avoid the real numbers. Sorry Paul, the numbers came out last week:

Last week, a Kaiser Family Foundation study concluded that under Ryan's plan, 59 percent of retirees and the disabled on Medicare would pay more for health care, ranging from hundreds to thousands more per year, depending on where they live. In Wisconsin, 10 percent of Medicare recipients would pay at least $100 more per month, the study predicted.

The simple question reporters never ask: "If Medicare is going broke; is too expensive now; and doesn't pay out enough to retain health care providers, how can reducing government premiums save the program, without costing more for seniors and shedding even more providers?"

Magic? A bidding war between providers to take on very high risk seniors?

Sadly, the huge number of conservative low information voters will "all be surprised" when they finally realize what Medicare reform really means.