Rasmussen has Thompson slightly ahead, as Tommy exploits 9/11. Sleazy.

Gee, who couldn't see this coming a mile away?


The fierce election fight between Tommy Thompson and Tammy Baldwin may be destined to go down as one of the most negative US Senate races in recent political history.

In a 30-day period ending Friday, 99% of the ads aired on broadcast television were negative, the highest percentage of any Senate contest in the nation, according to data provided by Kantar Media CMAG, which tracks campaign advertising.

While I’ve heard pundits lament the horrors of negative campaigning, it been working wonderfully for Republicans for years, at the expense of weak kneed Democrats.

Not anymore. In fact, what the Republicans have been doing is "defining their opposition first.” It’s an old advertising ploy the Democrats never picked up on, until now.

That’s what Rep. Tammy Baldwin did in her campaign. It worked! According to Craig Gilbert of the Milwaukee Journal Sentinel, that means Tammy's playing dirty?: 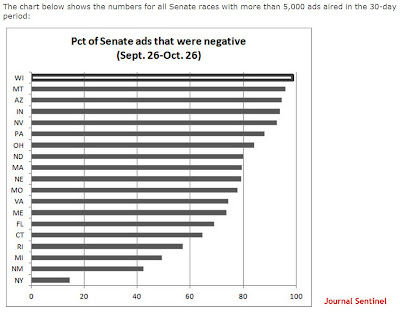 But Thompson has been coming up with every pathetic way to use the tragedy of 9/11 to vilify Baldwin. I know what you're thinking...still? But Republicans are throwing everything against the wall hoping something sticks or people just give up on Tammy.

Dan Bice: Four times in the past, Baldwin was listed as a co-sponsor for legislation that would allow peace-loving taxpayers to get a conscientious objector exemption from the Internal Revenue Service to stipulate that their income taxes wouldn't be used for war. Their taxes would go into a "peace tax fund," with the money being divvied out for non-military items. Baldwin most recently backed the bill three years ago.

Media Trackers - a conservative group that digs up dirt on Democrats - was the first to suggest that Baldwin's support for this measure meant she favored "denying body armor and medical supplies to U.S. military personnel" fighting in Iraq and Afghanistan. From there, the story took off. It was picked up by Breitbart, a conservative online news site, and plugged by talk show hosts Jerry Bader and Charlie Sykes.