Charlie Sykes doesn't like being corrected. He was caught lying and promoting the race baiting billboards posted mostly in minority area's throughout Milwaukee. He also knows the billboards were used to gin up anger and paranoia among conservative voters in outlying areas so they would be sure to go out and vote.

Sykes is scrambling to defend himself now that he's been exposed, just like Mark Belling was when he used the term "wetbacks." Milwaukee conservatives love their racist radio talk hosts because they legitimize and offer cover for their own deep seeded racist inclinations. Check out the map below of billboard locations warning voters they'll go to jail if they commit voter fraud. We're not stupid.

Sykes and his loyal listeners are claiming that of the 85 posted signs, a whole bunch of billboards were in outlying areas, offering them supposed political cover. Not a chance Charlie, only your listeners would believe that. Just look at the predominately red area below as proof; 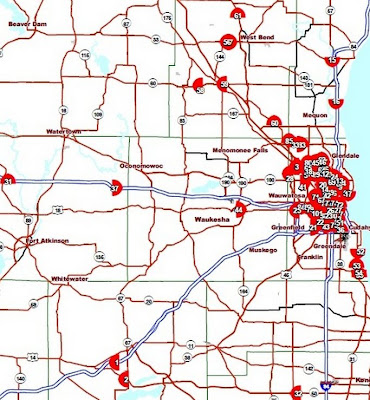 Twisting and spinning, Sykes can't run from the obvious, though he tries:

The entire attack on the voter fraud billboards and the philanthropist who paid for them boils down to the charge that they were "racist" because they were only placed in central cities. But that charge is factually false ... the charge is based on an easily refutable lie. Here is the map of the sign locations. You can easily see that signs were placed in Ozaukee, Washington, and Waukesha Counties, as well as Milwaukee County suburbs.

To distract, Sykes is outraged at jsonline's Dan Bice for omitting a line in their paper version:


The phrase "though some were posted as far out as Waukesha and Washington counties." was edited out of the dead tree. Why? Who took it out??? Bice replied, saying that no one had taken it out, but rather that the print story had been taken from an earlier edition of his blog post.

What really rankles Sykes is that he's have been exposed. Sykes' rabbit defense of the Einhorn's is desperate and pathetic:


Here is what is disingenuous:
Your [print edition] subhead suggests that the Einhorns are racist;
You [the print edition] include(s) a quote that accuses them of racism.
Your editors highlighted that charge of racism in the pull-quote.
And the one phrase that is exculpatory [for the Einhorns] appears nowhere in your print-edition story.