Voter fraud is nonexistent. But strongly paranoid conservative ideologues still think it worth committing a felony to vote fraudulently or that it’s happened at all (minus mistaken ex-felons).

While the Citizens United decision talked a lot about the free speech rights Americans and inanimate government creations known as corporations, my small donation can be tracked and identified, while big time conservative zealots can hide behind anonymous billboards. That’s fair?: 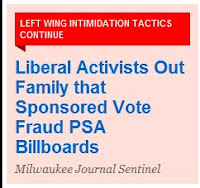 jsonline-Dan Bice: Stephen Einhorn - a Wisconsin venture capital fund manager and major GOP donor - acknowledged Monday that he and his wife Nancy paid for dozens of anonymous billboards in and around Milwaukee and two Ohio cities warning residents of the penalties for committing voter fraud.

"Stephen and Nancy Einhorn placed these billboards as a public service because voter fraud - whether by Republicans or Democrats - undermines our democratic process," said the Einhorns' statement, which was released by the Chicago public relations firm Culloton Strategies. "By reminding people of the possible consequences of illegal voting, we hope to help the upcoming election be decided by legally registered voters."

One Wisconsin Now and the website theGrio exposed the Einhorn’s who targeted mostly minority voters, all the while covering their tracks by allowing a few billboards in conservative areas. Even stranger, while it was against company policy at Clear Channel to accept anonymous political ads, they went ahead with the ads in a number of states anyway.

Scot Ross, executive director of One Wisconsin Now, issued a statement Monday raising several questions for the Einhorn's; "Perhaps their Chicago public relations firm could answer why the Einhorn's (didn’t) put their name on it, rather than hiding behind the cowardly veil of anonymity."

The Einhorn's were so frightened and concerned about their anonymity, that they boldly did an interview with radio host Charlie Sykes. Hey they weren't seeking any attention...right?

But conservatives are paranoid frightened citizens, who know their odd vision for the country is so unappealing that they have to hide in the shadows to force change.

Sykes said the foundation chief was given the option of disclosing his family's identity or taking down the ads. After initially considering releasing the family's name, Sykes wrote, the foundation's leader opted to pull the billboards because he was "reluctant to put his children and grandchildren at any risk."