If I could wave a magic wand over Medicare, I would guarantee the social safety net for those who believe in it, while at the same time I would give conservative whiners an iron clad exemption that guarantees the freedom they crave and no government rescue in case things didn't work out with their Paul Ryan voucher. 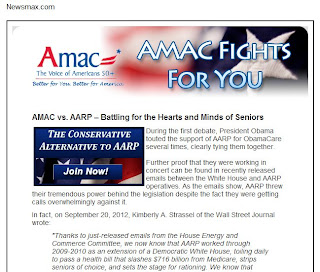 What Ryan and most conservative are planning to do with Medicare is push the problem off on the next generation. In the future, when seniors die and lose their homes, all the while bankrupting their kids families who were supporting them, reform will once again be on the table and the "new" New Deal will start all over again. Why?

Conservative ideology takes easy common sense solutions and puts theoretical indiscriminate road blocks in place, roadblocks they know will result in "tough decision" that require the "courage" of "leaders" to do what's best for Americans whether they like it or not (and they won't).

That's the whole idea behind the most ridiculous emerging power on the right, the AMAC Idiots.

The following is supposed to portray AARP as evil, for helping extend Medicare 10 more years and closing the drug donut hole:

On September 20, 2012, Kimberly A. Strassel of the Wall Street Journal wrote: "Thanks to just-released emails … we now know that AARP worked through 2009-2010 as an extension of a Democratic White House, toiling daily to pass a health bill that slashes $716 billion from Medicare, strips seniors of choice, and sets the stage for rationing. We know that despite AARP's awareness that its seniors overwhelmingly opposed the bill, the ‘nonpartisan organization' chose to serve the president's agenda.

Despite much of that $716 million going to close the donut hole and provide free senior checkups, not to mention cutting of excessive payments (bribes) to insurers and medical providers, the Wall Street Journal watchdogs have thankfully exposed the Democratic attack on seniors.

Even though seniors have not seen any rationing or limits on their health care choices, Strassel is convinced he nailed us. Thanks to the outrageously silly sounding lobbyist “Association of Mature American Citizens” (conservatives mature?), is there for backup. You’ll notice “Mature” is different from “senior”:

AMAC, a steadily growing alternative to groups like AARP … and with an expanding influence in the nation's capital, we aim to champion the interests of Mature Americans, seniors, and prospective retirees. We believe in religious freedom, free enterprise, and support common sense solutions to our Nation's largest challenges. As AMAC continues to build a presence in DC, we're able to stand up to the tremendous lobbying power of AARP on behalf of concerned conservative Americans that feel abandoned by an organization that was supposed to be looking out for the best interests of its members. AMAC can do something AARP will not do – we'll help replace the horror of ObamaCare with common sense solutions that will preserve our rights while improving the level of healthcare for all Americans!

What in god’s name are they talking about? Anyone have a “rights” problem with Medicare, anywhere?

AMAC is against the harsh provisions in ObamaCare … AMAC is fighting to keep our right to receive treatment from our doctors without the interference of Federal bureaucrats.