Scalia Works from a Different Constitution. 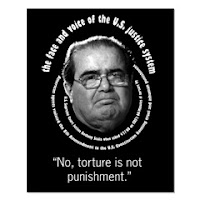 The Supreme Court ruled that foreign terrorism suspects held at Guantanamo Bay have rights under the Constitution to challenge their detention in U.S. civilian courts.

In its third rebuke of the Bush administration's treatment of
prisoners, the court ruled 5-4 that the government is violating the rights of prisoners being held indefinitely and without charges at the U.S. naval base in Cuba. The court's liberal justices were in the majority.

Justice Anthony Kennedy, writing for the court, said, "The laws and Constitution are designed to survive, and remain in force, in extraordinary times."

Keep in mind, 270 detainees, some of whom have been held more than six years, remain at the island prison. But that’s not bad enough for a tough minded conservative authoritarian, like Justice Scalia.

Scalia said the nation is "at war with radical Islamists" and that the court's decision "will make the war harder on us. It will almost certainly cause more Americans to be killed."

I present for you Justice Antonin Scalia, an activist conservative Justice, legislating (trying to anyway) from the bench:

Astoundingly, the Court today raises the bar, requiring military officials to appear before civilian courts and defend their decisions under procedural and evidentiary rules that go beyond what Congress has specified. But even when the military has evidence that it can bring forward, it is often foolhardy to release that evidence to the attorneys representing our enemies.

What competence does the Court have to second-guess the judgment of Congress and the President on such a point? None whatever. But the Court blunders in nonetheless.

Henceforth, as today’s opinion makes unnervingly clear, how to handle enemy prisoners in this war will ultimately lie with the branch that knows least about the national security concerns that the subject entails.

And, most tragically, it sets our military commanders the impossible task of proving to a civilian court, under whatever standards this Court devises in the future, that evidence supports the confinement of each and every enemy prisoner. The Nation will live to regret what the Court has done today. I dissent.