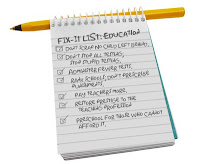 Republicans hate public education. They hate union involvement, regardless of the business, and they detest the concept of an “intellectual elite,” an educated public. Conservatives instead prefer to leave education up to “the parents” and private school curriculum, to simply save themselves a few tax dollars and promote a more compliant, easily manipulated undereducated public.

How else can you explain the contradictions listed below? On one hand, Republicans want accountability, on the other, no accountability. No Child Left Behind was meant to test student performance, make schools better and to prevent wasted taxpayer dollars, while at the same time, advocating taxpayer funded private schools with no testing or government interference.

According to USA Today, the Center on Education Policy concluded in its report “that math and reading test scores were up in most states since the No Child Left Behind law took effect in 2002, but also said it was impossible to know how much credit the law deserves. The law's contributions are hard to measure because a number of states already were taking steps to boost reading and math and there is no group of students to use for comparison."

Now let’s look at the real Republican agenda, their vision of an educated electorate. Remember, we already have a flawed system of testing public education. Is testing really the point, or a stealth way to fail the public schools, vilify them, and divert money into an emerging for profit educational industry? Clue: It’s not testing. Take a look at this refreshingly honest admission from the Texas Republican Party's 2008 Platform:

Vouchers were never meant to help minorities move out of troubled school districts or improve their chances of getting a better education; it was part of the “slippery slope” move to privatize education, shifting the educational burden from child free individuals to parents of children. Successful schools will cost more, attracting upper class family enrollment, while inferior schools will cement the lower class families in an endless cycle of poverty and low wages.

In other countries, universal voucher systems include public and private schools with the same curriculum and testing, providing a level educational field for everyone and quality control to encourage competition.

A reasonable solution ignored by conservatives because it again involves government oversight. And no matter how you look at it, government (or we the people) is bad.
Posted by John Peterson, Democurmudgeon at 6/25/2008 12:00:00 PM