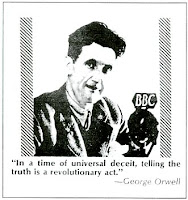 The last battle is about to fought in this young democratic nation. Former one term Republican state senator, Tom Reynolds, who has a radical reputation and is a card carrying member of the lunatic fringe, has not been sitting idly by watching his Party implode from the weight of its many contradictions.

How loony is this guy: According to the Wisconsin State Journal, “He advocated raising the speed limit on Wisconsin's Interstates and even floated the idea of a privately owned Autobahn after he was ticketed for speeding. He once sent out a Christmas card with him and wife portraying Joseph and Mary.”

In what Reynolds calls, Clean Sweep Wisconsin, he's recruiting conservative candidates to challenge Milwaukee-area Democrats, as Democrats in their party's primary this fall, to blur the line between what is real and what is phony. “Clean Sweep Wisconsin” should be called “Clean Sweep Democracy,” once other Republicans realize the benefit of infecting other state elections with this killer virus.

Reckless Reynolds authoritarian plan starts with a written pledge to his platform, (to) “agree to be held accountable to the campaign promises they make while running for office, with a promise to resign if they go back on their pledge and vote contrary to the platform they signed onto.

It’s at this point we descend into the maelstrom of discredited Republican, and now “Democratic,” talking points.

HEALTH CARE: Reestablishing consumerism in health care by expanding the use of high deductible policies with matching health savings accounts.

K-12 EDUCATION: Putting parents back in control of education by implementing an educational tax credit for parents to use at either public or private schools.

TAXES, FEES & REGULATIONS: Halting all increases of taxes and fees, begin a moratorium on new laws interfering in the lives of Wisconsin citizens and Wisconsin businesses.

"Rep. Christine Sinicki, D-Milwaukee, provided the State Journal with the message from Reynolds, which she said he left on her cell phone after she inquired about Clean Sweep through its Web site using a false name. 'They're pretty much trying to pull a fraud on the voters,' she said, by running as Democrats but supporting an agenda often espoused by Republicans."

"Phil Landowski, a primary challenger, acknowledged he has talked to the former West Allis senator about his campaign. His Web site includes positions similar to Clean Sweep."

Barry Burden, a UW-Madison political science professor, said he had not heard of a strategy like Reynolds' before. He said it likely wouldn't work because primary voters are typically the most loyal to their parties and would know which candidates have party support.

Rep. Tamara Grigsby, D-Milwaukee, said the area's lawmakers plan to meet later this week or early next week to discuss how to address Clean Sweep's activities. "It could be a real issue for us and we're trying to strategize how to go against it

Because Republicans don't believe in their own government, and blame governement for getting in the way of their freedom, is it any surprise at how low their criminality will go?