Are Democrats Responsible for Gas Prices? Republicans Make it so By Repetition 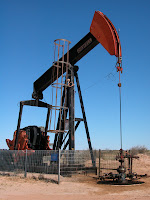 A very conservative friend of mine a few months back blamed me and fellow Democrats for the high price of gas, saying that since the Dems took Congress, the prices at the pump soared. Knowing that it had every characteristic of a GOP talking point, but gathered my thoughts and explained what I knew. Since then, I done a little information gathering. Here's the latest, first from the New York Times:

It was almost inevitable that a combination of $4-a-gallon gas, public anxiety and politicians eager to win votes or repair legacies would produce political pandering on an epic scale. This is worse than a dumb idea. It is cruelly misleading. It will make only a modest difference, at best, to prices at the pump, and even then the benefits will be years away. It greatly exaggerates America’s leverage over world oil prices. It is based on dubious statistics. It diverts the public from the tough decisions that need to be made about conservation.

Separate studies by the House Committee on Natural Resources and the Wilderness Society show that roughly three-quarters of the 90 million-plus acres of federal land being leased by the oil companies onshore and off are not being used to produce energy. That is 68 million acres altogether, among them potentially highly productive leases in the Gulf of Mexico and Alaska.

With that in mind, four influential House Democrats — Edward Markey, Nick Rahall, Rahm Emanuel and Maurice Hinchey — have introduced “use it or lose it” bills that would force the companies to begin exploiting the leases they have before getting any more. Companion bills have been introduced in the Senate, where suspicions also run high that industry’s main objective is to stockpile millions of additional acres of public land before the Bush administration leaves town.

Here's a short history and detailed "trail of truth" about the oil industries effort to keep up with demand and stabilize prices.

According to Think Progress:
In 1981, Congress protected America’s coasts, beaches, and marine ecosystems from the threats of oil and gas development when they adopted the Outer Continental Shelf (OCS) Moratorium. Every year since then Congress has renewed the moratorium. In 1990, President George H.W. Bush authored an additional level of protection which deferred new leasing until 2002 which Bill Clinton then extended in 1998 (by 10 years).
The presidential deferrals are set to expire in 2012.

In the Rose Garden today, Bush 43 said: “So my administration has repeatedly called on Congress to expand domestic oil production. Unfortunately, Democrats on Capitol Hill have rejected virtually every proposal — and now Americans are paying the price at the pump for this obstruction.”

Congress — which was under Republican control for most of the Bush presidency — is not blocking drilling. The number of off- and on-shore drilling permits has exploded in recent years, going from 3,802 five years ago to 7,561 in 2007.

Since 2002, the number of permits issued has greatly outstripped the number of new wells drilled. In the last four years, the Bureau of Land Management has issued 28,776 permits to drill on public land; yet, in that same time, 18,954 wells were actually drilled. That means that companies have stockpiled nearly 10,000 extra permits to drill that they are not using to increase domestic production. Furthermore, less than a quarter of offshore acreage open to drilling is being used. Only 10.5 million of the 44 million leased acres are currently producing oil or gas.

The vast majority of federal oil and gas resources offshore are already available for development. According to the Minerals Management Service, of all the oil (85.9 billion barrels) and gas (419.9 trillion cubic feet) believed to exist on the Outer Continental Shelf, 82% of the natural gas and 79% of the oil is located in areas that are currently open for leasing (such as areas in the Gulf of Mexico and off the Alaska coast).