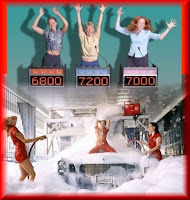 So this is what it’s come to. Invention Prize Economics?

Milwaukee Journal Sentinel- Sen. John McCain proposed the “Clean Car Challenge,” giving a $300 million prize to the inventor of the next big thing in electric car batteries. The $300 million represents “one dollar for every man, woman and child in the U.S. — a small price to pay for helping to break the back of our oil dependency.

Stunning! The Republican solution to the U.S energy crisis has been reduced to a game show jackpot, offering $300 million to the first to open the prize winning door to battery technology. Am I the only one who finds “Invention Prize Economics” appalling? Crazier still, Democrats were only “wary” of the plan.
This isn’t just John McCain’s $300 million pot of gold at the end of the rainbow, it’s our gold.
That’s 300 million TAXPAYER DOLLARS. Does that mean consumers will own a piece of the profit pie, or be given a discount on the retail price of the vehicle, to make up for our upfront investment? Or is it just a “really big gift” to someone, anyone? What if this taxpayer payout goes to a foreign inventor i.e. corporation?

Right now, “the Japanese firm Panasonic EV Energy is the market leader in
hybrid-electric batteries. It’s clear that the Asian players have a lead over
U.S. battery market competitors, (and) the U.S. auto industry hasn’t seen the
research and development funding from the federal government that has been
provided to companies in Asia.”

Consider this: (One anylist said) “I would have a concern about John McCain writing a check to (Korea-battery supplier) LG but then give nothing to Johnson Controls-Saft if it comes out with technology that’s not first but is still very efficient.”
It’s also noteworthy to mention McCain has opposed requiring automakers to improve gas mileage year after year because it would hurt the economy, create massive layoffs and raise the price of cars. Funny, that seems to have happened anyway, without raising CAFÉ standards.

My two questions to straight talker John McCain: Is Chuck Berris now an advisor, or couldn’t you get Monty Hall?
Posted by John Peterson, Democurmudgeon at 6/24/2008 11:28:00 AM