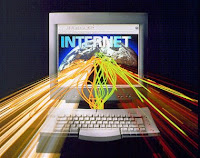 Perhaps after this Pew Survey, the major news networks will wake up and take the hint: your not doing your job! According to AP News:

Americans dissatisfied with political sound bites are turning to the Internet for a more complete picture, the Pew Internet and American Life Project said…30 percent of adults have used the Internet to read or watch unfiltered campaign material - footage of debates, position papers, announcements and transcripts of speeches. "They want to see the full-blown campaign event. They want to read the speech from beginning to end. It's a push back from the sound-bite culture."

Thirty-five percent of adults have watched a political video online during the primary season, compared with 13 percent during the entire 2004 presidential race. Yet they have mixed views about the Internet in politics. Sixty percent of Internet users fear that misinformation and propaganda are widespread online and that too many other voters are trusting that information.

It sums up what I have always said on my radio talk show and here on this blog: What you read here or anywhere, should be the starting point...to finding out more.
Posted by John Peterson, Democurmudgeon at 6/15/2008 08:08:00 PM