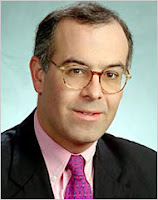 Author and political radio host Thom Hartmann summed it up best when he clearly defined conservative and liberal. “Conservatives believe that people are essentially evil at their core. If you were to survey the vast majority of people you’ll find that more than half of them were evil. And liberals believe that the majority of people are good. And everything flows out of that.”


Applying that standard to the following commentary from conservative syndicated writer David Brooks. He’s an new book that looks into the psychology that “people are essentially evil at their core.” In Brooks’ “Art of Growing Up,” Hartmann’s definition of conservativism is right on.

The concept of maturity has undergone several mutations over the course of American history. In Lincoln’s day, to achieve maturity was to succeed in the conquest of the self. Human beings were born with sin, infected with dark passions and satanic temptations. The transition to adulthood consisted of
achieving mastery over them.

You can read commencement addresses from the 19th and early 20th centuries in which the speakers would talk about the beast within and the need for iron character to subdue it. The whole character-building model was sin-centric. Progressive educators emphasized students’ inner goodness and curiosity, not inner depravity. In the last few years, we may be shifting toward another vision of maturity, one that is impatient with boomer narcissism.

And yet, though we’re never going back to the 19th-century, sin-centric character-building model for breeding leaders, it has its uses. It would be comforting to see a president who’d looked into the abyss, or suffered some sort of ordeal that put him on a first-name basis with his own gravest weaknesses, and who had found ways to combat them.

All this suggests a maxim for us voters: Don’t only look to see which candidate has the most talent. Look for the one most emotionally gripped by his own failings.


I think it's time we take Brook's advice, and look into the abyss of out bathroom mirrors, recognized our gravest weaknesses, get a grip of our failings and that narcissistic beast from within, and deal with the infected sin-centric dark passions and satanic temptations we're all trying so hard not to show. Once we do that...

Time for a shower.