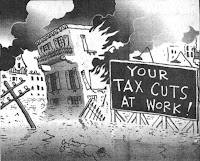 The Party of unaccountability is at it again. The Wisconsin Assembly had been controlled by Republicans from 2003 until 2006, the Senate long before that. They made government smaller and cut valuable public services. Since they never plan ahead, state emergencies are met with sympathy and condolences. Recent flooding in the state has everyone scratching their heads wondering how things could have been done differently.

With doe eyed innocence, Republicans are suddenly reflecting back on concerns they may have had before all the public suffering. They were in charge; they did nothing but cut taxes, propose tax freezes, wean people from government handouts and hope nothing bad happens. Here’s their revised version, frame if you will, of this Republican legislative blunder.

According to the Wisconsin State Journal: Pleas for money from local authorities and the state DNR went unheeded. Legislators and officials with the DNR said tight budgets and the absence…of a pressing disaster account for the failure to approve money for the fund. Republican State Rep. Les Nerison, (who) chaired the Assembly's Rural Affairs Committee said…”It's too bad something like this has to happen before people listen.''

Republican State Sen. Dale Schultz, said "When it's raining, everybody is concerned about dam safety. When it's not, this gets relegated to the back burner…the state's failure to adequately fund the repair of its dams is part of a larger problem. What it illustrates is that, in a larger context, we're drifting further away from core services in government. We're shirking our responsibilities to infrastructure. State government needs to take a long, hard look at itself.''

Now suddenly, they realize they have been shirking their responsibility. A little late. Of course, they're framing it as though the fault lies with both parties. This readers comment sums it up well for me:

deepblue34: Clearly, the GOP stranglehold on state politics led to the dam fund running dry. Last session, Mike Huebsch let only a few bills pass the Assembly after taking a record amount of time to reach a budget deal. Place the blame where it belongs -- with the GOP, who has screwed up WI royally. Thanks Tommy, Glenn Grothman, the Fitzgeralds, Leah Vukmir, Steve Nass(ty) and the rest of those close-minded fascists.