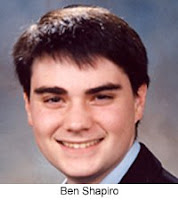 Republicans have nothing left in the quiver. They’ve run out of ideas and ammunition. So what weapons do they have left you may ask? How about a bad parody of a good parody.

It’s called “Why I'm Voting Democrat.” Ben Shapiro of CNSNews.com wrote this truly lame take off of the video, “Why I’m Voting Republican.” (scroll down to see video) Snide and mean spirited, what was supposed to be humorous reads like the screenplay of a B horror movie. Outrageous analogies followed by gory visions of the apocalypse, this screed reaffirms the notion that conservatives don’t have a sense of humor. I’ve culled the best of the worst here.

Ben Shapiro prefaces his parody with: "This insulting nonsense is precisely what liberals think of conservatives: We're all warmongers, racists, environmental rapists and secret emissaries of big corporations. In the spirit of even handedness and fair play, however, I feel it my duty to explain why I'm going to vote Democrat. "

I'm voting Democrat because it's my body, and if I want to kill my baby, I'll do it, even if its head is in the birth canal. If I want to cut out my intestines and feed them to the crocodiles, I'll do that too. That's the freedom our forefathers enshrined in the Constitution.

I'm voting Democrat because our enemies on the battlefield deserve comfy hotel rooms, Pay-Per-View, prostitutes and all the benefits of American citizenship.

I'm voting Democrat because I believe we need other countries' permission for me to turn down my thermostat.(Kyoto)

I'm voting Democrat because everyone deserves crappy health care. Sure, you'll have to wait years for that life-saving cancer surgery. But it's first come, first served at the cemetery!

I'm voting Democrat because I believe in minority rights (except in Muslim countries), free speech (with regard to pornography but not conservative talk radio), environmentalism (unless we're talking about Al Gore's house) and diplomacy (but never backed by the threat of military force).