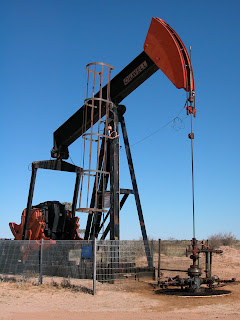 In a stunning display of sticking it to the public, "Republicans blocked Democrats from requiring oil and gas companies to drill on the millions of acres of government land and water on which they already own federal leases."-AP

How do the Republicans get away with such blatant kowtowing to the oil industry at the expense of the public interest? Where’s the public outrage over these do nothing conservatives?

Democratic leaders maintained the industry should first go after oil and natural gas in areas where they hold leases. "We believe in use it or lose it," declared Rep. Rahm Emanuel, D-Ill.

The White House said President Bush would veto the use-it-or-lose-it legislation if it came to his desk, calling "absurd" the claim that, with today's oil prices, companies are not pursuing all the oil that they can recover economically.


Oh, I get it now. If they can’t recover oil “economically,” then why go after it at all? Small profit margins are so obscene.

Democrats maintained the existing leases owned by oil companies could produce 4.8 million barrels of oil and 44.7 trillion cubic feet of natural gas a day. But the Interior Department, which manages the federal oil and gas leasing programs, said it could not confirm those numbers.


Well then that’s OK, if you can’t confirm the numbers, then why do anything at all about it.

Are we talking about children here or lazy, corrupt, politically motivated government cronies?

That's an easy one.

UPDATE: July 20, 2008: House Republicans blocked a Democratic effort to pressure energy companies into drilling for oil on lands they already leased from the federal government, calling the legislation a sham.

Opponents said the legislation could diminish domestic exploration since it would bar oil companies from obtaining new leases if they were not actively exploring current holdings. “Drill on the leases you have or let somebody else do it,” said Representative Steny H. Hoyer, Democrat of Maryland and the majority leader.

Under fire from Republicans for not opening up coastal areas to new drilling, Democrats offered the legislation to show that they favored increased domestic oil and gas production, but want it to take place where drilling is already allowed. They said oil could be produced more quickly from those areas rather than in new locales.