Walker on $11 million campaign funding advantage over challengers: "One offsets the other." Really? 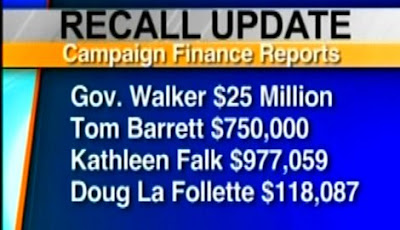 Here's how Scott Walker explained in on Upfront:

UPDATE: 5/1/2012- This is a graphic from the Milwaukee Journal Sentinel, that shows Walker with $4.9 on hand, meaning he's spent a lot of it so far. Yet the race is close. Still, Walker holds a decisive edge in spending money; Walker's $4.9 million to Barrett's $475 thousand. And that doesn't take into consideration all the outside groups chomping at the bit to support their corporate takeover with ads of their own.

But is Walker serving the taxpayers or…well, you fill in the rest:

BostonGlobe: Wisconsin Gov. Scott Walker's fan list reads like a who's who of some of the richest people in America -- financial gurus, a Las Vegas casino president, even an NBA team owner. He spent nearly $11 million and had almost $4.9 million in the bank. His biggest donor was Diane M. Hendricks, founder of Beloit-based American Builders and Contractors Supply Co. Inc. Forbes estimates she's worth $2.8 billion. She gave the governor $500,000. The next two biggest donors were Sheldon Adelson, chief executive officer of the Las Vegas Sands casino, and Richard DeVos, owner of the Orlando Magicbasketball team and co-founder of the Amway Corp. The connections he's built have paid off -- none of his challengers' ledgers is even in the same galaxy. Monday's filings show Walker's opponent in the Republican primary, college-aged political protester Arthur Kohl-Riggs, raised just $2,045 and spent about $480 between Jan. 1 and April 23. He had $1,565 in the bank.