The authoritarian hand of the Catholic church, and its tyrannical Bishop Robert Morlino

The folks in Platteville never liked the “traditionalist” priests that took over their parish, and they made that very clear from the beginning. Bishop Morlino’s iron fisted control over his flock has now officially turned ugly. Simply put, Morlino prefers a Medieval approach to Catholicism.

Forget the First Amendment, we’re dealing with the ultimate authoritarian religion. And it's happening at a time when we seem to be witnessing a conservative authoritarian takeover of our government. You will not speak freely, and you will not protest!!!

WSJ: Madison Catholic Bishop Robert Morlino has moved to quell a backlash against a group of conservative priests in Platteville since June 2010 by warning parishioners they risk formal church censure unless they stop spreading "rumors and gossip."

The action by Morlino, which two Catholic scholars called highly unusual, appears to include the possibility of offenders being prohibited from taking part in church sacraments such as communion, confession and burial.

Within months, church donations fell by more than half, and about 40 percent of the church’s 1,200 members signed a petition seeking the priests’ ouster. The church’s 77-year-old school is set to close June 1 (because of the changes).

The penalty in the land of the free? 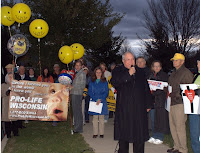 The letter, in which Morlino raises the prospect of invoking the church’s Code of Canon Law against dissenters, has stunned many parishioners. "There’s almost shock and awe," said Myron Tranel, a member of the church’s finance council.

Where there are those who work to "incite hatred," there "may need to be more formal warning and action," Morlino wrote. An addendum cites many church laws, including one in which anyone who publicly incites animosities or hatred toward church authorities "is to be punished by an interdict or other just penalties."

The frightening followers who see nothing wrong with serving their declared authority, love the idea of punishment.

Others applaud the bishop’s move, saying decisive action was needed because criticism had gotten out of hand. "This is a warning shot across the bow — you either want to be a Catholic or you don’t," said Gregory Merrick, a member of the church’s pastoral council.


And the targets of religious persecution (is this really happening in America)?


Terry Busch wonders if he’s a target of the bishop’s message. "There’s nothing I’ve ever said that isn’t true, but it sounds like if you say anything about the priests or the church, they’re coming after you," he said. "Now I don’t know exactly what that means. Do they send you to hell or take you to court?"