What if you held a fake primary and the phony tries raise money, or worse, tries to win? How could that affect the plans of the incumbent? What started off as an allowable attempt at election fraud, has now morph into a Pandora's box of possibilities. 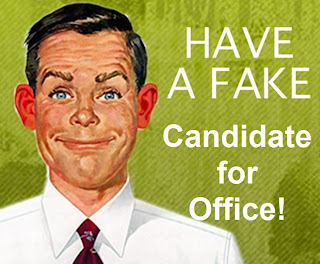 Caledonia Patch: Tamra Varebrook, the "protest" candidate for the 21st Senate District, is hosting a fundraiser Thursday (today), but the state GOP had no idea and has no involvement.

State Sen. Van Wanggaard is under recall here in Racine County (against) former Sen. John Lehman. In an email to Patch, Varebrook explained the event as more of a get-together. “Tomorrow's event is a gathering a friends, family, and supporters. We are against the recall of Senator Wanggaard, Governor Walker, Lt. Governor Kleefisch, and the other 3 senators. Our focus is to remind the constituents…”

Patch requested an interview with Varebrook to ask her what she'll do with the money she raises, but in a second email message back to us, she declined to comment.

Ben Sparks, communications director for the Republican Party of Wisconsin, had no idea Varebrook was holding a fundraiser. "This is the first I've heard of it ... The state party is not expending further resources past getting names on the ballot." The county party is also not involved, "A placeholder candidate is just that. If this were still a three-way race, it might make sense, but otherwise, I really have no idea."

Ken Brown of the Racine TEA Party said "If she uses the money to actively campaign  … Or she could keep it in her fund and donate it toward the election campaigns of other Republicans … Varebrook can hang on to the money and use it to run for office again one day.

This is only the beginning too. The GAB's decision to allow Republican fake candidates, ignoring the statute that makes it illegal to lie to an election official, has opened the door to every lying scoundrel (conservative) to throw their hat into the ring. How long will it be before we also lose faith in the electoral process and the candidates running in them?