The U.S. isn't even keeping up with cheap labor countries like Mexico: 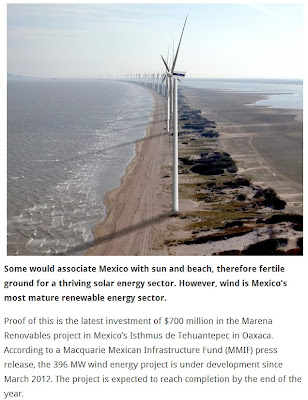 But that's not all. Believe it or not, even without the influence of American socialist Democrats pushing their green agenda, Mexico decided on its own, to go green:

35% of Mexico’s electricity comes from renewable energy sources by 2024.

The establishment of the National Institute of Ecology and Climate Change, a research and development institution.

The creation of a foundation for raising and channeling public, private, national and international financial resources for carrying out relevant projects.

“We can no longer afford to postpone this national law,” said Senator Eva Sandoval Contreras.

From July 2010 to July 2011, 43,355 restoration activities from the damages of climate change took place in 570 municipalities, totaling over $2.2 billion USD. The senators used this example to show the economic implications of failing to implement measures that reduce greenhouse gas emissions.