Even in Wisconsin, the Public Votes Against their own Best Interests, for the sake of Politics.

That cuddly softy Charles Franklin, director of the Marquette Law School polling project, is usually not someone I turn to for political analysis, but this time I think he’s onto something.

What we’re seeing in Wisconsin, we’re also seeing nationwide; the public seems to be dramatically for all the issues pushed by Obama and the Democrats when it comes to social programs and education, and in many cases economics. But when asked who they’ll vote for, it’s a close call for either Republican or Democrat. For example, Americans want just the opposite of the agenda pushed by Republicans: 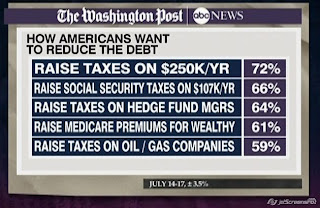 Yet Republicans are still getting votes, being elected and are trusted to do the right thing. In Wisconsin:

WSJ: Two-thirds of respondents to Marquette's January poll opposed reducing state aid to public schools, a higher percentage than those who opposed cutting Medicaid, limiting collective bargaining of public employees or requiring public employees to contribute more to pension and health insurance premiums. Even self-described conservatives were split about 50/50 on cutting aid to schools, but that doesn't necessarily translate to a vote against Walker, Franklin said. "This is a very vital area for the debate, but it's one where any objective evidence that could convince a skeptic one way or the other is very hard to come by," Franklin said.

For once, Franklin hit the nail on the head. Can it be pure politics that makes a person vote against their own strong position on the above issues?

Even more confusing to me is the statement below, from the state PTA, who should be as close as anyone to educational issues in our schools:

Kim Henderson, president of Wisconsin PTA, said parents are confused by the rhetoric about education cuts compared with what they're seeing in their children's schools. "They're not feeling the cuts as bad as sometimes the press and everyone tells them they're going to," Henderson said. "People aren't really sure what is the truth."

They’re not feeling the cuts? Where in god’s name has the PTA and these parents been for the last 15 years?

Even before Walker, dramatic cuts were being made in schools all over the state and nation because of NCLB; the arts, Gym, history, field trips, bus services, teacher staffing, school maintenance, tech upgrades, building expansions etc. The PTA is either as partisan as the Walker administration and should be pulled from our schools, or they’re a part of the problem that does nothing to support actual education.
Posted by John Peterson, Democurmudgeon at 4/22/2012 10:13:00 AM