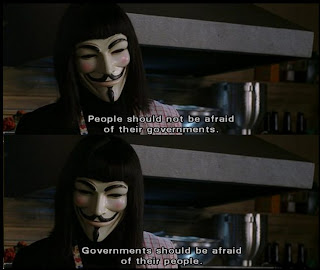 Scott Walker has basically told Republican to vote Kathleen Falk in the primary. Although this might be newsworthy for those in other parts of the state, Milwaukee has been hearing this for the last month on talk radio. With Walker’s lead in the last PP Poll, he’s now just playing the odds.

What Walker has done, is artfully “frame” his possible win in the recall election, as an affirmation of “courage,” shorthand and an excuse for ignoring the public’s rejection of his policies. When you can frame the very people you’re supposed to represent out of their role in government, the ruling authority knows no bounds. We saw that when Walker and the Fitzgerald’s were able to successfully vilify those protesting their government. It still amazes me. Walker isn't hiding his authoritarian power grab either:


"I think when we win, it will not only reaffirm what we did. It will send a powerful message to every politician … in our state and even in our city governments who are trying to take on the tough issues and do the right thing," Walker said. "It will send a powerful, powerful message that you can stick your neck out, you can make the tough choices and there will be voters helping you along the way."

Check out how nicely Walker frames "courage" at his recent Chicago visit:

Those voters will back a one party authoritarian ruling class that is in their image. Which brings me to the topic at hand:

WTAQ: Governor Scott Walker made some waves when he said that Kathleen Falk would be a weaker Democratic opponent for him than Tom Barrett in the June recall election … Walker went on Mark Belling’s talk show in Milwaukee Thursday– and he was asked why he’s only running TV ads that attack Barrett and not Falk … the governor responded by explaining why he thought Falk would be the weaker opponent, saying quote, “She has clearly staked herself out as being in the pocket of the public employee unions – and that has not clearly been attached to Tom Barrett.”

Republicans know how to campaign. Walker paints Falk as a puppet of the unions, angering conservative voters, while attempting to anger liberal voters by painting Barrett as no friend of the unions.


The Wisconsin Republican Party is clearly repulsed by the democratic process:

"This baseless recall election will force more than $9 million in unbudgeted costs on Wisconsin families. The Democrats themselves have changed the precedent for this baseless recall every week, which highlights that it is a movement pushed by the Democrat party and their union allies to try and regain power at any cost. The cost of this recall election is unprecedented … Even when they are voted out by the people of Wisconsin, the Democrats have shown they are still able to find a way to burden our state with frivolous spending."