The Odd Defense of Stand Your Ground, by Wayne LaPierre.

When the NRA puts killing in "context," they’re not helping their cause.


I suppose we should be thinking defensively, or fatalistically, or something…I’m not sure what, from Wayne LaPierre’s recent defense of the stand your ground law.

What he does say unintentionally is that he’s one sick SOB, and a Bizarro World escapee. 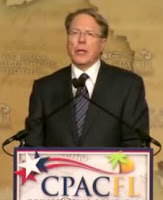 Politifact: Wayne LaPierre, the gun-rights group's CEO, sought to put the Martin killing in context by noting that 'violent crimes happen all the time in cities across the United States.' Specifically, LaPierre said, 'By the time I finish this speech, two Ameri­cans will be slain, six women will be raped ... That's the harsh reality we face, all of us, every single day. But the media, they don't care. Everyday victims aren't celebrities. They don't draw ratings, don't draw sponsors.

Talk about projection. Gun lunacy in the country is getting away with murder because the coverage of everyday peoples deaths are too numerous to mention, and yes, they don't get celebrity like press.

Cars as a dangerous killing weapon: But LaPierre received criticism for overestimating that “two Americans will be slain” statement during his speech. Why? Along with gun deaths, Wayne includes alcohol impaired-driving deaths. Oh yeah, cars kill too.
Posted by John Peterson, Democurmudgeon at 4/20/2012 11:56:00 AM