Scott Walker was not welcome in Illinois, and over a thousand people turned out to say so, including Madison's Sly in the Morning (not shown). WCIA:

The scary part: Walker sharpened his now fanatical diatribe for the power hungry business elite, who ate it up at the Illinois Chamber of Commerce bacon wrapped hundreds.

Here's the most outrageous line of the day, where Walker makes sure everyone knows who's in charge, even though what he's done had nothing to do with helping hardworking taxpayers:

WCIA-3: Walker told the crowd he didn't get into politics to be popular. He says more politicians need to step up and make the tough, and sometimes, unpopular decisions.

"Who's in charge? Is it a handful of union bosses that get to call the shots? A handful of big government union bosses who will control things in our state and local governments, or is it the hardworking taxpayers? I don't know about all of you, but I choose the taxpayers every time."

Of course Walker and the Republican legislature had nothing to do with those “tough, and sometimes, unpopular decisions,” right? He didn't mention anything he did. But you know, Walker never represented me, a taxpayer. I guess I wasn't wearing their now mandatory brownshirt.


So that was another leg of the Walker ego trip around the country. But what about the rabid Chamber
of Commerce state traitors who are looking to Walker for advice? What do they have in store for the public as they gain more and more political power? You'll love this:

StatehouseNews:“We did pick Walker partially, because he was controversial,” said Illinois Chamber of Commerce president Doug Whitley. Whitley said the chamber believes pension and Medicaid reform are needed to help fix the state’s finances, and those reforms must happen this spring … the chamber supports raising the retirement age and an increase of contributions by public employees.

What, didn’t see anything in there about “shared sacrifice?” And this is only the beginning! Give them a little time to page through a few Dickens novels. This is what is known as a Dickensian vision of labor in America. 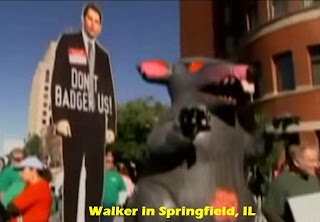 “Wisconsin’s budget deficit was only caused from huge corporate tax break. Walker called the legislature into a special session to pass these give-aways,” said Anders Lindall, spokesman for Illinois’ chapter of the American Federation of State, County, and Municipal Employees, or AFSCME. “And now he uses the deficit as an excuse to attack middle class people.” Lindall said, “We plan to run him (Walker) out of town.”

As for the protesters, the actual count was around 4,000 people, but...

More than 1,000 union workers protest the visit of Wisconsin Governor Scott Walker outside the hotel where he was speaking. Everyone was chanting and cheering, holding up signs. They were trying to send a clear message to the governor; to worry about the politics back in his home state of Wisconsin.