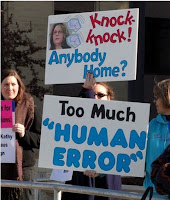 Nickolaus' decision to temporarily hand over her duties to Waukesha's Deputy Clerk Kelly Yaeger for the two recall elections was prompted after calls for her resignation … Shortly after the latest mess, during an interview while we were guest hosting the Mike Malloy Show on April 6th, election integrity expert John Washburn of Wisconsin Fair Elections explained to us that Yaeger had been both hired and trained by Nickolaus herself.

Doh! Missed that one. So now there’s this report:

As reported by Sarah Millard of the Brookfield Patch ... It looks like the office of embattled Waukesha County Clerk Kathy Nickolaus won't be able to bungle the counting of votes … That's because Waukesha County is now requiring municipalities with the capability to do so to submit the results directly to the state instead of first reporting them to the county. Votes will be entered directly into the state system by the municipal clerks, which eliminates the need for clerks or election workers to come to the county clerk’s office on election night. After the results are entered into the state system, clerks will sign a report and fax it to the county clerk’s office, according to an email sent by Deputy County Clerk Kelly Yaeger to area clerks. The county will still post unofficial results with the GAB, canvass the votes and perform all other duties under state law.

So we can rest easy now?

Curiously, Millard's article ends by noting that "A spokesman for the GAB said Friday evening that he was unaware of the changes."