Environmental Violations down, thanks to business friendly Republicans.

Wisconsin’s pristine environment saw violators because it wasn't business friendly enough. But it is now under DNR Sec. Stepp and pollution is a thing of the past.

What, businesses are now complying with and towing the mark on possible environmental violations? The certainty that comes with an anti-EPA political party is making businesses pollute less?

That’s what DNR Secretary Cathy Stepp would have you believe:

WSJ: Environmental enforcement activity by the state Department of Natural Resources has dropped dramatically in the past two years … with the number of permit violation notices hitting a 12-year low in 2011. DNR officials say the decrease is partly caused by an enforcement staff that's been hit hard by budget cuts. But they also point to a philosophical shift ... "I don't apologize for that," said DNR Secretary Cathy Stepp of her emphasis on customer service and a less-confrontational agency. “(Businesses) know they have somebody they can come to and help them comply."

How reassuring. They know they have somebody they can depend on to look the other way, or at least, roll their eyes in agreement. 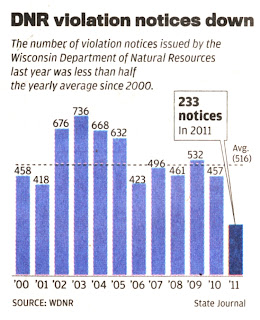 Critics, including current employees and recently retired agency officials, say they see tough regulation and enforcement being de-emphasized by politically appointed administrators, it is happening at the expense of the agency's traditional and legally mandated duties of oversight and environmental protection. Sue Miller, a conservation warden in Hayward … has been with the DNR for more than 30 years … “it seems like we're supposed to use a lot more caution … 'Use really good discretion in what might be controversial areas.' But the conclusion we come to is, 'Don't write the ticket.” "I've had seasoned guys who call me about blatant charges and say they are having second thoughts because the person says they'll call the governor's office or the secretary. You really end up talking guys through it. There is a lot of stress in making decisions where there wasn't before."

Gordon Stevenson, who retired in January from his job overseeing permits for industrial-sized farms called concentrated animal feeding operations, or CAFOs, described a gradual move in the past two years toward less enforcement and more influence within the agency by business interests, including business and farm lobbying groups. The push, he said, is to write permits rather than enforce them. "My conclusion is that there is not an emphasis on enforcement in the current administration. The attitude is 'We're in trouble economically so let's suspend the rules.' Is that a good idea? I don't think it is."

And right on cue, Stepp blamed…

Stepp said such a large staff always will have disgruntled employees.

The number of violation notices issued by the DNR in 2011 was far below the annual average for the past 12 years in several crucial areas.

George Meyer, executive director of the Wisconsin Wildlife Federation, is a former DNR secretary described the decreases as "more than a dip." "The numbers are so dramatic, it is clear there is a different philosophy toward enforcement."