When you take out of our state economy all the money that would have gone to teachers and public workers, something had to give. Heck, even I knew we were in for some trouble. But it's nice to see an actual economist say pretty much the same thing. 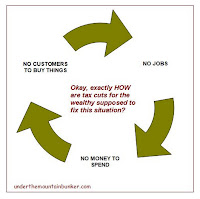 WSJ: Who could have predicted … Wisconsin would experience the nation's largest percentage decrease in employment over this 12-month period? Um ... actually, UW-Madison economist Steven Deller could have. And did. Last March, Deller, a professor of applied economics, studied the ripple effects of Gov. Scott Walker's budget-repair bill and two-year budget proposal.

Deller felt Walker's plans to balance the state's budget by cutting spending and public workers' take-home pay will slow the state's economic recovery … Deller estimated the state would lose more than 21,000 jobs as public agencies and workers were able to spend less in their communities. According to the most recent numbers from the Bureau of Labor Statistics, Wisconsin lost 23,900 jobs from March 2011 to March 2012.

Deller said his prescient estimate was the result of simple economics. "It's really straightforward," he said. "You take billions out of the economy and their will be ripples, and those ripples are jobs."