Like the 2010 elections, I guess the less people know, the better a Republican candidate does.

Even stranger is how frightened Walker appears to be of the public. What a way to lead the state. This story by Journal Sentinel Dan Bice says it all: 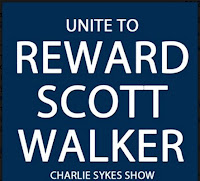 His staff is trying to keep that a secret. One veteran Republican handler explained the thinking behind the Walker team's unusual attempts to remain invisible in this already bizarre recall election.

"I don't know that I recall a campaign not publicizing their campaign offices," said GOP campaign strategist Mark Graul. "But based on some of the ridiculousness of the absurd protesters, it makes sense not to let those people know where they're at so they don't go over there and dump beer on their heads or any of the other stupid things those idiots do."

After pouring one beer over a snarky Republicans head (now a tradition whenever Robin Vos is spotted in public), suddenly our concealed carrying scaredy-cat lawmakers have decided to duck and cover? Where’s all that “courage” Walker talked about having, as he lords over everyone in the state? And what's with the authoritarian pronouncement that government protesters were “ridiculous” and “absurd.” Just what the founding fathers would have wanted?

But it's not like this is the only thing Walker's team wants to keep top secret. His state office does not post his schedule ahead of time, releasing a monthly calendar only to those who ask. And the campaign doesn't announce fundraisers and won't provide a list of previous out-of-state events.

But Barrett and Falk and the two other Dem candidates weren't targets of massive protests as Walker was after he proposed doing away with collective bargaining for most public employees.

Wait! Why aren’t the Democratic candidates being protested? Could it be Walker supporters are letting big money do the walking and talking for them with outlandish media buys? Where are all those “tea party” genius's without the aid of their Koch brothers buses.

Most of his campaign work takes place outside Wisconsin borders.