Walker's vision of Austerity in Wisconsin a disaster.

Scott Walker and Paul Ryan, like many conservatives, want to bring the economy down to it's lowest point, to Great Recessionary levels. No spending and no new revenues. It's true and very odd. Instead of of bringing the economy back to normal, and making policy from that point, conservatives believe we should always be at our low point. The only way to go is up. It's kind of a sad "glass is empty" ideology.

So the following analysis compares the UK's austerity program, put together by a conservative Prime Minister, to Obama's stimulus plan.

Business Insider: The below chart was made by Reuters' Scotty Barber, and it shows economic growth in the US, the UK, and Europe.

Now the first thing to note is that the US has recovered WAY better than either the Eurozone or the UK. The UK was recovering on a fine trajectory right up until early 2010, at which point UK growth hit a brick wall. What happened in 2010? That's when conservative David Cameron came to power with an agenda of reigning in the debt. Sound familiar? Basically we have a life test of a country that wants to do what conservatives in the US want to do: reduce national debt. Doing so is a growth disaster. 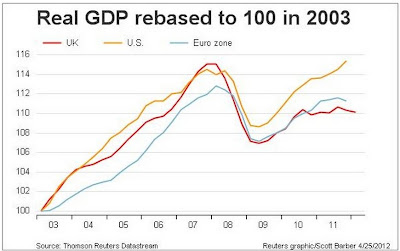 Here's what Thom Hartmann wrote in his daily newsletter:


The U.K. is officially in a second recession as the British economy shrank for the second straight quarter. Conservative Prime Minister David Cameron whose government has been pushing trickle-down austerity for nearly the last two years called the new economic numbers, "very, very disappointing." The U.K. joins the long list of other European nations that have pursued trickle-down austerity and watched their economies tank - like Greece, Italy, and Spain.

Meanwhile in France - Conservative President Nicholas Sarkozy is desperately trying to cling to his job against Socialist Francois Hollande who's running on an anti-austerity platform. Over the last year - we've seen the devastating consequences of trickle-down austerity - the job layoffs, the riots, and the suicides. And now - the politicians, banksters, and technocrats pushing trickle-down austerity in Europe are feeling the political backlash from their desperate populations.

Meanwhile - multi-millionaire Congressman Paul Ryan and the Republican Party here in the United States are pushing the same sort of trickle-down austerity - ignoring the economic consequences on full display across the Atlantic.