Disappointingly, Democrats were willing accomplices to GOP efforts to spread stupidity and fear about Syrian refugees. Our own Rep. Ron Kind jumped on board the “stupid” bandwagon. See the list of gutless Democrats here.

It’s hard to imagine anyone getting behind the following compilation of reckless uninformed fear laced rants, but they did, marking another very dark moment in U.S. history. I put together all the clips I could find in just a couple of hours, so there's still a whole lot more I missed. Will we look back on all this with utter disgust? This is what the Republican Party is using to divide the public in order to win a presidential election. It's eleven minutes of mostly hate and a few moments of honesty:

The claims that the screening process isn't rigorous enough is total BS, as you can see that by the screen capture here: 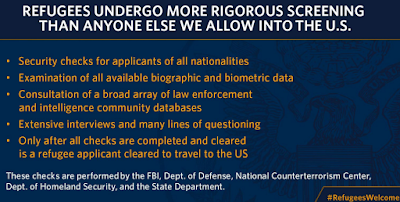 Consider this journey into the manufactured fear of Syrian refugee terrorists getting something for nothing:


Rep. Mo Brooks (R-AL) suggested that Syrian refugees are just trying to come to the United States for a "paid vacation" ... "We’re paying them about $15,000 a year in free health care, free food, free shelter, free clothing, free transportation," according to audio posted by ThinkProgress. "That answers very quickly why so many of them want to come to the United States of America. Were paying them to come here. It's a paid vacation!"

Speaker Paul Ryan constructed this Orwellian take on the refugees, after constructing what would be an indefinite road block to Syrian immigration: "Certified safe by the FBI, Department of Homeland Security and the Director of National Intelligence." Of course it's never going to happen, and yet...


"We are a compassionate nation. We always have been, and we always will be."

You would think Ryan had access to the chart below, or have some working knowledge of it after cooking up his impossible test for Syrian refugees trying to come to the U.S.:

The only person that could cut through the GOP rhetoric? Comedian John Oliver picked up where our news media dropped off the face of the earth:


“Every generation has had its own ugly reaction to refugees, whether they are the Irish, the Vietnamese, the Cubans, or the Haitians, and those fears have ben broadly unfounded. In fact, there was only one time in American history when the fear of refugees wiping everyone out did actually come true, and we’ll all be sitting around a table celebrating it on Thursday.”

And religious freedom? It apparently has more to do with contraception and gay marriage than it does letting Muslims freely exercise their religion beliefs: