The Republican exploitation of the terrorist attacks in France, by candidates desperate to win the White House, does come with consequences. Check out the twitter picture below in Irving, Texas.

This is happening now; gun toting thugs following and intimidating Muslims Americans exercising their First Amendment right. What, in a Christian nation like ours? 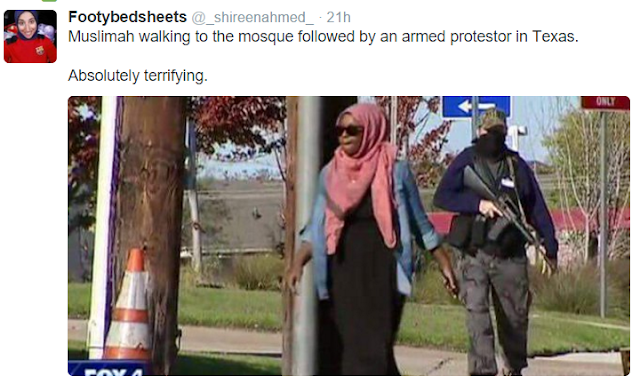 Chris Hayes took a closer look at the supposed "Islamization of America," where the leader of the armed protests posted the names and addresses of Muslim's in Irving on Facebook. Irving's wack-a-doodle Mayor Beth Van Duyne has falsely stated the mosque there established the countries first Islamic court to practice Sharia law. That won't radicalize the targets of fear mongering Republicans:

While I've been trying to make the case that Republican are fascists, every conservative troller I've encountered were convinced that it's really just the other way around...

...but as is always the case, when a Republican is making the same case as I am, suddenly everybody starts listening. Here's an incredibly effective ad that should have been produced by a Democrat...instead, it's Gov. John Kasich making my case: 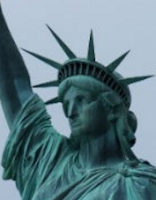 Smithsonian: The Statue of Liberty was originally designed to be a Muslim woman, the Smithsonian Institution's magazine says. An article on the government-administered museum’s blog, Smart News, claims one of the designers of Lady Liberty drew inspiration from monuments in Egypt and originally intended to construct a veiled female peasant on the Suez Canal. The article cites historian Barry Moreno, author of multiple books about the statue, whose Islamic origins were also reported last week by The Daily Beast.

Howard Dean let loose on Republican fear mongers and fascist. Great stuff and should a part of every Democratic interview with the media:


During the interview below, Chris Hayes received this early Christmas gift from tea party favorite Rep. Steve King, who blathered on about requiring Muslim immigrants to deny their religion in order to stay in this country. King even claims Muslim's don't assimilate well in our Christian nation because they bring with them Sharia Law, which is incompatible to Americanism: