Walker: A Deer in Reality's Headlights!

Remember this gem from early on in Scott Walker's first term as governor, still posted at Office of the Governor Scott Walker:

Can you say "sucker?" Of course they loved the idea of tax cuts, go figure.

But business leaders, economists and Democrats disagreed with Scott Walker's plan to reduce corporate taxes in the state, saying that was not a major deciding factor for businesses contemplating staying or coming to the state. Lifestyle, services, transportation, and an educated workforce topped their lists.

But Walker stuck with his purely ideological supply side plan, and it's now collapsing around him, with the announcements from Oscar Mayer and S.C. Johnson. Sadly there is little or no blowback from conservative voters. In 2017, Oscar Mayer would have gotten this Walker gift, which as we can see now, didn't influence Oscar Mayer's decision one bit: 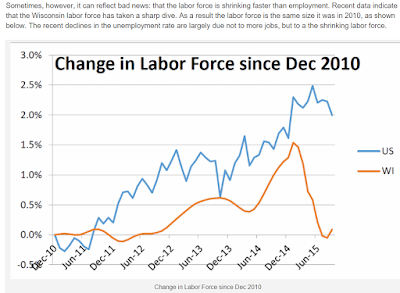 With no business sense or curiosity to ask Oscar Mayer about the merger and what it might mean for Wisconsin...:

Wisconsin's flagship economic development agency did not contact Kraft Heinz after the company's landmark merger, and it was not among the states that offered economic incentives to prevent layoffs at Kraft Heinz manufacturing plants.

Madison Mayor Paul Soglin said from what he could tell WEDC had not contacted the firm since a shift in ownership this year. "If WEDC failed to contact Oscar Mayer in the critical months of July and August of this summer, why would anyone think there is anything productive to be gotten out of WEDC?"

In another instance of Wisconsin media giving Walker a pass on accountability, Walker’s deceptive lie about WEDC contacting Kraft Heinz but never saying when, only got a mention. WPR:

Gov. Scott Walker told reporters Thursday that WEDC had made contact with Kraft Heinz, and that the company turned down help from the state.


"The bottom line is they've had contact with the WEDC in the past. We've provided assistance. They said they didn't need that assistance."

As it turns out, that contact happened a full two years before Kraft Foods Group and Heinz finalized a multi-billion dollar merger to become one of the world's largest food companies.

And no one in the press felt played or pissed off?

Walker's not at fault again, while former Gov. Doyle is still blamed for Great Recession's job losses: Walker was quick to blame known liberal investor Warren Buffett, and not himself. Fox 6:

Scott Walker: "You'll have to ask people like Mr. Buffett and others whose companies engineered this decision. It has nothing to do with Wisconsin, it has everything to do with a corporate decision that was made by the merger of those two companies. It's not something where they've even made contact with us.”

S.C. Johnson announced plans to transition 175 jobs to the Windy City within the next two years:

Walker: "The bottom line is different there. They've got significant investment in the state. In this case, it was specific to marketing positions. They've had a hard time attracting those because they attract them globally, not just here in the Midwest.”

Walker's decision to revive a fading manufacturing base in the state at the expense of every other emerging industry, narrowed Wisconsin's options for recovery. Now Walker is using that as an excuse to justify job losses?

Adding insult to injury, this was the headline today:

Burst of hiring: US employers added 271,000 jobs in October

Illinois Slaps Back: Wouldn't you know it, Chicago Business magazine provided a brief Walker history highlighting his vindictive efforts to hurt other states:

You may recall a news conference a couple of years ago at which Wisconsin Gov. Scott Walker presented a $500,000 check to an Illinois trade show display company that was moving north across the border, declaring "There's a better place here."

Or the time the governor urged Illinois firms to "escape to Wisconsin."

Or the similar $500,000 ad campaign aimed at employers here and in the Minneapolis/St. Paul area.Well, governor, let me introduce you to Oscar Mayer, which yesterday announced it's laying off 2,600 people all over the country—including in Wisconsin—but moving 250 well-paying jobs and its headquarters from Madison to downtown Chicago.

Not to mention consumer products giant SC Johnson, which announced today that it's bringing 175 jobs to downtown Chicago from its headquarters in Racine, Wis.

Touche, Gov. Walker. Perhaps this week's news will underline the point: Raiding the neighbor's pantry doesn't do much to enrich the neighborhood.

Here is a list of some of the jobs lost in the past couple of months. jsonline:

Joy Global Inc.: This week said it was closing its mining equipment facility resulting in the loss of 56 jobs. In October, the company said it was laying off 113 people at the National Avenue plant.

Harley-Davidson Inc.: Said in October it was cutting about 250 salaried jobs by the end of the year, across the company.

We Energies' parent company said in October it would cut jobs in Milwaukee and Green Bay.

General Electric announced in September that it would stop making engines in Waukesha and cut 350 jobs.

Caterpillar Inc., a heavy-equipment manufacturer in South Milwaukee that builds some the word's largest mining machines, says in September it's cutting about 10,000 jobs worldwide in the next four years.

Johnson Controls announced in August that the company plans to cut up to 197 jobs at its newest office in the Milwaukee area, in West Allis.

According to the Department of Workforce Development, 9,341 plant workers across the state have lost their jobs this year in mass layoffs between the beginning of the year and mid-October. That compares with 6,186 layoffs all of last year.

Trickle Down Disaster a Surprise? That's what the lobbyists at WMC are saying. BizJournal:

Kurt Bauer, president and CEO of Wisconsin Manufacturers & Commerce, said he was also surprised by the Oscar Mayer move. "I think we’ve done an awful lot recently to make Wisconsin a good place for food and beverage manufacturing … Bauer cited recent legislative changes like the Manufacturers and Agricultural Production Tax Credit, which will reduce corporate tax liability for manufacturers to 0.4 percent from 7.9 percent by 2017. "I think Wisconsin is as competitive as anybody in the upper Midwest."

That said, the increase in mass layoffs so far this year compared with last year is disconcerting to Bauer. "But just look at the economic indicators in the last few weeks. It’s been mostly downward, with GDP in the last quarter only up 1.5 percent in the U.S." 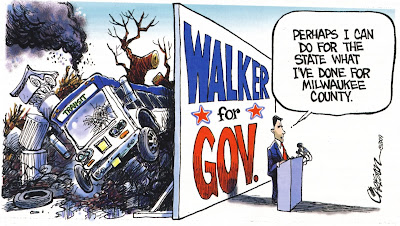